“The teacher must derive not only the capacity, but the desire, to observe natural phenomena. The teacher must understand and feel her position of observer: the activity must lie in the phenomenon.” Maria Montessori

Our teachers are our school’s greatest assets. We are very fortunate to work with such gifted educators, both in our classrooms and in the larger school environment. Here is a bit of background on each. 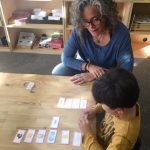 After completing her B.A. in Literature and Classical Studies, Melody began her career in Early Education in 1990. She has worked with children from infancy to school-aged in university and college lab-schools, literacy groups and Montessori schools. In addition to teaching and guiding children, Melody was a college instructor in Early Education. She has also enjoyed designing and facilitating early literacy programs for young children and their families as well as Montessori enrichment and remedial programs to support children from all educational backgrounds in language and mathematics. In her spare time, Melody combines her love of literature, creative expression and children to write novels and storybooks for young children.

In 2004, Melody earned her Association Montessori Internationale Casa teaching certification from the Foundation for Montessori Education. This evolution in her career was the result of a growing frustration with traditional early education programs and philosophies and an increasing awareness of alternative educational theories and outcomes garnered through her extensive travels and research.

Melody has practiced and refined her skills in an effort to create an environment that honours and embodies Montessori theory, materials and practice but also extends into the arts and the community at large, representing a true Montessori spirit of peace and respect for all children. This is the impetus for The Orchard Montessori School. 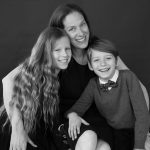 Holly completed degrees in English, Psychology and Social Work then worked for many years in advertising, design and editorial illustration. Her daughter’s experience in Montessori proved transformative and in 2012, she co-founded The Orchard with Melody, acting as its administrative lead before completing her Elementary training in 2015. The school began with only seven students in the front room of Holly’s home and has grown to over sixty students with programs serving children from ages 2-12 years in a school building on Dovercourt.

The mission in founding The Orchard was to provide families with a traditional Montessori education that reflected the interests of the community of children it serves. This has evolved to include key emphasis on the arts and natural sciences in a bilingual environment. She has completed her certifications in Model United Nations and World Peace Game facilitation as well as Restorative Yoga Teacher Training. Holly leads the grade 6-7-8 programme and the gallery at The Lyceum on Queen Street West.

Maude has extensive experience working with children in Quebec and Ontario. After moving to Toronto, she completed her Montessori teaching certificate in 2010 and worked exclusively within the French Montessori system. She is passionate about supporting and guiding children and she has developed and teaches the Elementary afterschool program. Maude’s main role, beginning in September, is to facilitate and aid in the running of the school in order to best support Montessori. If you have a question, starting in September 2019, she is the first point of contact: maude@theorchardmontessori.com

When Maude is not teaching, she can be found taking nature walks, kayaking and enjoying the outdoors. She also loves to cook and takes pleasure in trying out new foods and discovering the city. 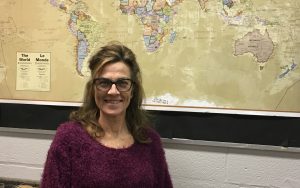 Katherine has worked with children in various settings for 35 years. She began her career as a camp counsellor and later camp director at a residential camp for developmentally challenged children. After completing her Bachelor of Social Work at Ryerson University, Katherine took her AMI Primary diploma at the Foundation for Montessori Education followed by her Lower and Upper Elementary diplomas and eventually, her Master Teacher certificate. She has been devoted to Montessori education for the past 26 years and has taught all levels from casa through grade 12. Katherine also ran her own school for ten years.

Katherine teaches the Elementary program at Orchard, which stands out for its cosmic scope. Children are encouraged to make deeper, inter-curricular investigations that find expression in novel ways. Most importantly, they are challenged to pause to consider the impact of their engagement with the world around them.

In her spare time, Katherine cultivates a keen interest in beekeeping. 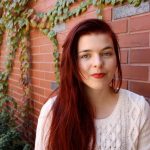 Emily has completed her Primary diploma from TMI and her Elementary diploma from MACTE. She also has a Bachelor of Fine Arts Honours Degree in Dance. She is also a certified Hatha Yoga instructor and has completed her Limon teacher training. During her time in university, her senior thesis focused on the study of creative freedom in children under the age five. She believes in the blending of Montessori philosophy with the creative arts. Emily is the Directress of Casa East.

In her spare time, Emily is involved in a number of collective dance projects, enjoys reading and is attempting to learn the ukulele. 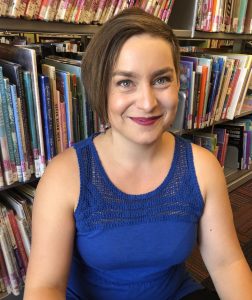 Jennifer Slade grew up in Grand Rapids, Michigan where she attended public Montessori school from age 3. After completing a degree in Music Education at the University of Western Ontario, she returned to Montessori.  Jennifer received her AMI primary diploma from the Foundation for Montessori Education in Toronto in 2014. She was a lead guide for 4 years. In her role as casa assistant at The Orchard, she offers one on one music lessons throughout the day, and fun, music theory filled, dynamic music conferences daily. Jennifer has also completed her training in several yoga styles of yoga including Anusara, Moksha, Restorative, and Kids yoga. Collaboration and Community through music and the arts are among her favourite things, along with potlucks, books, and having coffee on her deck with her family.

Lucinda received her Bachelor of Arts in English from Tyndale University College. She harbours a deep passion for working with children, having done so in various capacities including school mentorship activities, volunteering, and her own swimming school, where she taught children of all ages. She also previously worked in a private school teaching grade 2. Lucinda is fascinated by watching students learn, grow, and connect with their communities. Lucinda enjoys cross-stitching, reading classic literature, and writing her own stories. She also enjoys singing with her husband and baking. 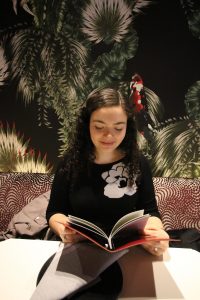 From an early age, Eleni knew she wanted to be a teacher. She completed a Bachelor of Arts in English and French Literature and graduated with honours. During her university years, however, she completed a placement in schools but found the traditional system did not match her idea of what it meant to teach. Upon graduation, she taught ESL and tutored students in literacy and math for three years. Eleni is excited to be immersed in Montessori and to foster growing independence in literacy and math for students in our elementary program. In addition to her lifelong commitment to learning and self improvement, Eleni also enjoys travel, yoga, visual arts, cooking, and baking.

Nick has an extensive background in music education and is delighted to lead Orchard’s music program with voice, percussion and instrument training for elementary students aged 6-12 years. Nick also offers private lessons after school in ukulele, piano and guitar. Please contact him directly to register at nickarseneaumusic@gmail.com

Andrew Long of Three in a Box Illustration

Andrew studied Fine Art and English Literature. He works as a graphic designer and art rep at Three in a Box illustration. He brings to the Wednesday Maker Club a diverse array of visual art and handwork skills. Working in both traditional and digital media, he guides the children towards realizing their projects. Andrew is known around the school for being able to make almost anything. In his spare time, he plays bass in Tilda and produces music for Random Orbit Records.

Rose, under the guidance of Shi Chang Dao of the Shaolin Quanfa Temple Institute, leads the children through various physical postures in the practice of kung fu which call attention to the six Shaolin virtues of compassion, focus, strive, perseverance, respect, and leadership. STQI represents an ancient 1,500 year culture called Shaolin. Its mission is to teach the ancient arts of kung fu martial arts, qi gong, and meditation so that people can lead healthier lives.

Ira teaches two different age groups in our after school tennis group. With this in mind, the children to work on flexibility, coordination and balance while learning the basic skills and rules of tennis with like-age peers.