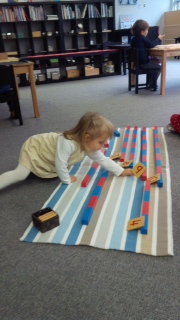 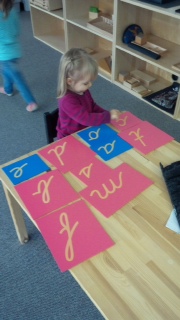 There was a really interesting Globe and Mail article in the paper this weekend called The Root of the Problem. It talked about the deep concern educators are feeling over declining math scores in Canada. It seems a shift away from concept-based approaches to mathematics toward traditional arithmetic drills is afoot. Focus in schools is shifting away from literacy to numeracy interventions in the early years. The article goes on to describe the notion among a prominent group of researchers that some children are inherently wired for math and others are not. This unqualified categorization of children as “capable” versus “not” is really quite destructive. The article also described how standardized testing in grade three, well into a child’s development, is inherently problematic. One educator quoted in the article described it as a “wait to fail” model.

Literacy and numeracy in a Montessori environment are perceived and presented as systems of communication which develop in tandem. Each one provides us with a language to frame the world around us. In the casa, children are introduced to notions of quantity and value in a meaningful context before they are shown the corresponding symbol. In this way, they begin to know the inherent quality and properties of numbers and therefore understand them more deeply. The pink tower, for example, may look like a pile of building blocks but it is a three dimensional representation of the decimal system. It is also one of the first pieces of work shown to a child in a Montessori casa. So rather than waiting until grade three to diagnose a deficit in math, surely it makes better sense to engage the interest of a child of two and half in the understanding that mathematics is one, among other, meaningful ways in which the universe around them can be explained.