Orchard to Sit on Model UN Bureau in New York 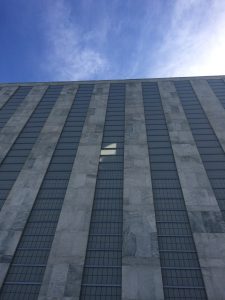 Each year, 2000 students from all over the world go to New York to participate in Montessori Model United Nations. They spend several months preparing their position papers and county’s case dockets before traveling to New York. Once there, they embark on a two day negotiation to draft resolutions under the guidance of an administrative body made up of a group of high school students and a teacher. The final resolutions are read into being in the General Assembly Hall of the United Nations. MMUN is one of a small group of organizations who have access to this incredible opportunity to hold their simulations in the UN building. Last year, we took a delegation of five who were successful in getting some of their solutions drafted into resolutions and they stood out for their sophisticated handling of negotiations. As a result, we were invited to participate on the Bureau.

Last week, Holly traveled to New York where she trained with three other teachers and 40 high school students. The role of the Bureau is to provide information, guide protocol, act as senate and interface with visiting teachers and parents. Orchard is proud to work with this esteemed organization in its efforts toward peace and international youth cooperation.